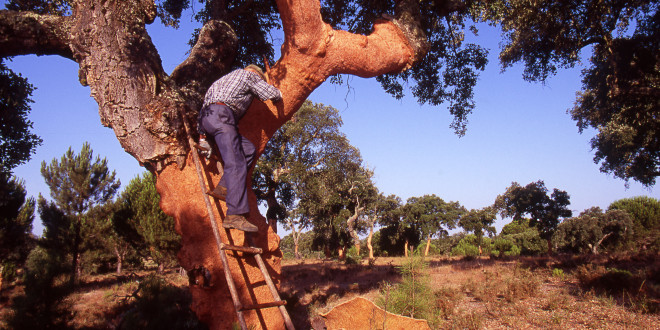 The Other Side of Cork

The grin on Manuel Peixiubo’s weathered face appears easily beneath his frosty moustache. Peixiubo is jovial and friendly, but he works fast and doesn’t stop while he talks. Here on the Pipa cork farm near Coruche, 40 kilometers (25 mi) southeast of Lisbon in Portugal’s sunny Alentejo region, a man’s wage is only as good as his speed. At 67, Peixiubo is no amateur. His muscular arms have been swinging the traditional cork-harvesting axe since his 20’s, and he can tally over 20 arrobas a day. One arroba—the term, derived from Arabic, defined the load that a donkey or mule could carry—equals 15 kilos, or 33 pounds, of cork bark. Peixiubo still busies himself with construction work in the off-season.

Lumbering behind the men, a tractor pulls a wagon laden with the freshly harvested bark. High atop the load, Gracinda Vicente balances herself while the wagon bumps through the forest. She laughs when asked her age. At 59, her skin bears the evidence of years of outdoor work, gathering cork slabs from where the harvesters drop them. Like Peixiubo, she began working the harvests in her 20’s.

Peixiubo and Vicente are part of the approximately 6000 skilled seasonal workers in Portugal’s cork industry, which produces over 50 percent of the world’s cork. The cork tree (Quercus suber) is an evergreen oak found in seven Mediterranean countries: Portugal, Spain, Italy, Morocco, Algeria, Tunisia and France. The tree thrives in areas with low rainfall, dry summers and high temperatures, its deep, extensive root system nourishing it during drought. The bark is harvested every nine to 12 years in early summer, once the tree has reached 25 years of age and a circumference of 70 centimeters (27 1/2″) at chest height. Cork trees can survive for more than 200 years: The oldest known tree was planted in Portugal in 1783. Historical records dating back to the fourth century bce document the use of cork in shoes, beehives, fishing gear, boats and housing.